COLE SPURS THEM ON

West Ham and Tottenham encounters have always been friendly; looking back to the 70's, Spurs fans, with their strong Jewish background, had to endure fascist salutes from certain sections of Hammers fans wearing Doc Martens and skinhead haircuts. On Saturday at Upton Park, the players got in on the act. Carlton Cole scored a contender for peach of the week with a sublime flick of the outside of the right foot, swivel, then thunderbolt with his left. Spurs keeper, Carlos Cudicini, out of his 10 year retirement, was so impressed by Cole's skill, that instead of moving for the ball he decided to let the ball fly past him. 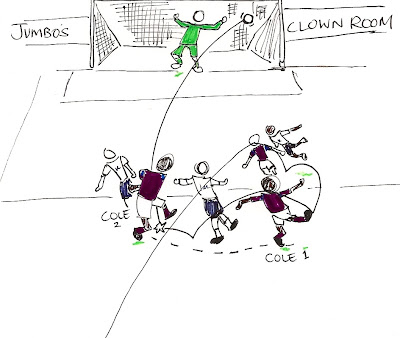 Just 5 minutes later, Cole, wanted to repay the favour. Receiving the ball in his own half, Cole looked for the Spurs player most likely to even up the game, he spotted Jermain Defoe the man who scored an impressive hat trick mid week, and played the ball straight to his feet. Defoe almost ripped the net with his equaliser. Spurs the went on to win the game 2-1 and now sit at the top of the table. SICKNOTE SHOWDOWN
The boys are doing us proud, not only are they playing, but they are also scoring, although Saha did take one of the worst penalties ever on Saturday. Owen is ahead right now in appearances as Everton have only played 2 games so far. But there's plenty of time for Saha to catch up as it has been reported that Owen pulled a muscle in his arm while blowing kisses to the Man Utd fans after scoring his first goal for the club he has, "always dreamed of playing for".

Reebok gave the world the Reebok step, and the Reebok pump but they've really outdone themselves with this little number. Bolton Police are offering an amnesty to local gangs, free shirts in exchange for their guns no questions asked. In other news, shootings in the Bolton area have risen by 50% this week. 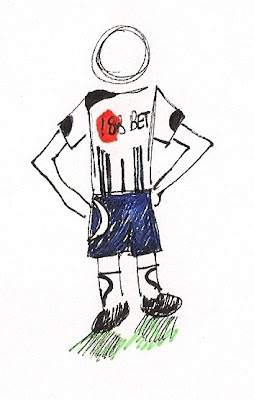 PLAC UPDATE
Burnley retained their status as leaders of the Alternative league by beating Everton 1-0 at Turfmoor. Everton are now the only team in the Premier League without points and are hotly tipped to appear in the next Crap Kits feature. But it's not all bad, according to Man Utd fans losing to Burnley was, "The best thing that could have happened to us" apparently, losing a game makes you wake up and stay focused for the rest of the season. Remember Liverpool drubbing the Mancs 4-1 last season? Who could forget? To hide their disappointment of getting absolutely stuffed at home by their hated rivals, Man Utd fans tried to convince everyone that they were, "Pleased it happened as it will stop us from getting complacent!" They lost to Fulham in their next match. Next up for the league leaders Burnley is a tough game at Stamford bridge against Chelsea; the Blues are coming off a solid 2-0 win versus Fulham. Everton will be wishing the were playing Wigan as after losing to Burnley, Man Utd were completely focused and thrashed the Latics 5-0.
Posted by Loo Read at 11:45 AM No comments:

Well, well, well the FA didn't see this one coming. As usual the fixture computer "randomly" picked out some pretty tough opening ties for Man Utd, newly promoted cloggers Birmingham City, then red hot relegation favourites Burnley. Things started great with the Mancs destroying the plucky Brummies, racking up an impressive 1-0 scoreline. But the FA's plan to keep Fergie's whiskey breath away from their nostrils backfired; Burnley managed a 1-0 victory themselves turning Ferguson's face the same colour his nose usually is. 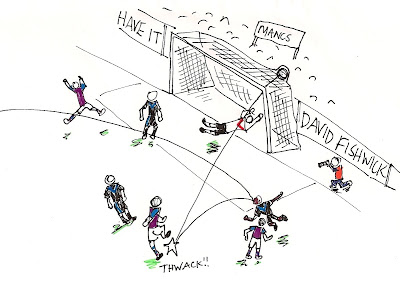 Early contender for Peach of the week goes to match winner Robbie Blake and this corker. Prompting Burnley fans to chant "You're not Robbie Blake" to Rooney whenever he shanked a shot. (Thanks for that Father Creswell)

On the stroke of half time the Burnley defence tried their hardest to undo the team's good work and gave away Man Utd's first penalty of the season.
It gave Michael Carrick a chance to equalise with his first touch of the game. He failed, but not to worry, later on in the 90th minute the influential 18 million pound midfielder managed a second touch. 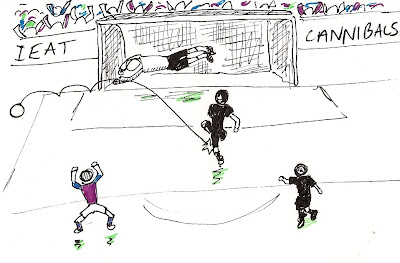 Final score Burnley 1 Manchester United 0, which means the "Premier League Alternative Championship" is on!
Yes the championship, which owes its foundation to The Unoffical Football World Championships is up and running. As Manchester United were last years Premier League winners they started the season as the best team in the league; following the rules of the "Premier League Alternative Championship" or PLAC, Burnley are now the new league leaders as their 1-0 victory knocked the Mancs off their perch. The Clarets try to retain their status on Sunday at home against Everton.

The current PLAC leaders celebrate.
Posted by Loo Read at 4:41 PM No comments:

Well, the 2009/10 Premier League season is here; players appearing in court and crashing their cars while under the influence just isn't quite like the real thing; it's great to see our overpaid heroes back where they belong, on the pitch (With the exception of Joey Barton, who belongs behind bars). Performance of the weekend must go to Arsenal who took full advantage of Joleon Lescott's transfer to Manchester City which left a huge gap in the Everton defence. Some of the defending on set pieces would have given commentators wet pants had it been Everton's neighbours Liverpool and their Zonal marking, but it wasn't so credit went to Arsenal. Final score Everton 1 Arsenal 6. NEWS JUST IN, Lescott hasn't actually gone yet; he played the entire 90 minutes. 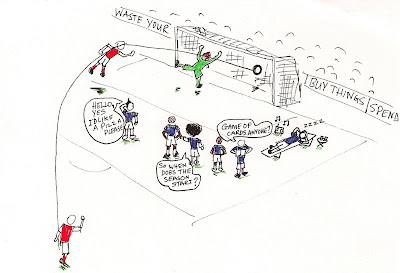 The red three quarters of the city of Liverpool didn't fare too much better though, as Pepe Reina forgot to wake up the rest of the squad for the kick off and had to fend off Spurs for 45 minutes. The team arrived at White Hart Lane to start the second half but were already one goal down thanks to a screamer from Assou-Ekotto. Final score Spurs 2 Liverpool 1. SHOWDOWN OF THE SICKNOTES
The league table means nothing at this stage of the season, however everyone will be wondering how the Showdown of the sicknotes plays out. We'll be keeping an eye out for Owen and Saha, and informing you anytime one of them, "Gets up rather gingerly". No jokes about Paul Scholes please. A substitute appearance was made by both players without injury, well done boys! 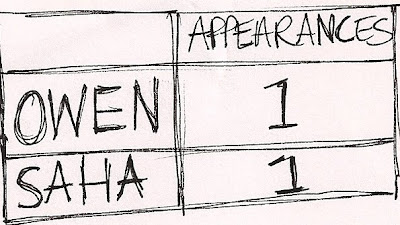 CRAP KITS
Oh dear, the new Man Utd Nike kits are horrible; it's bad enough that they're sponsored by AIG but this monstrosity looks like it's been put together by a 6 year old in some third world country, but I'm sure Nike would never let that happen. 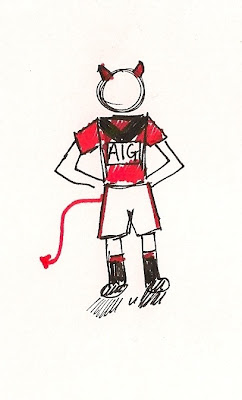 PEACH OF THE WEEK
This weekend saw some beauties: Noble, Denilson, and Assou-Ekotto, but this week's fuzzy fruit award goes to Wigan's Columbian striker Hugo Rodallega for his cracker against the Villa.

THE BIG MOVERS AND SHAKERS The biggest movers in and out of English football this summer came and went from Manchester; the Old Trafford Megastore reported all of their life size Ronaldo dolls missing as 8 removal vans headed into the direction of Madrid. Sales of Speedos have also plummeted in the region.

Meanwhile, hospitals in the Greater Manchester area cracked open endless bottles of champagne, celebrating that the arrival of Michael Owen will bring employment and job security for years to come.